Canberra Central Library is hosting the Anzac Stories: Behind the Pages Exhibition until 1st December. Do pop along to check it out! 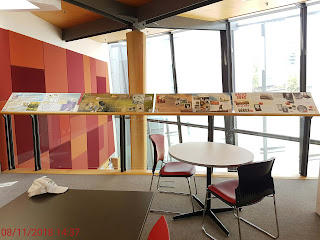 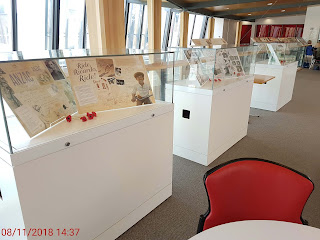 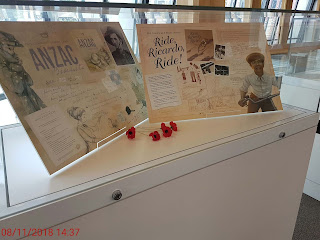 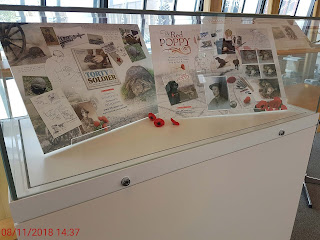 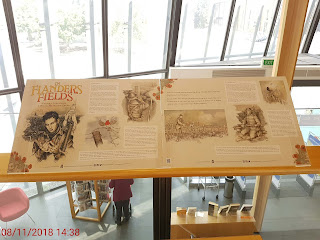 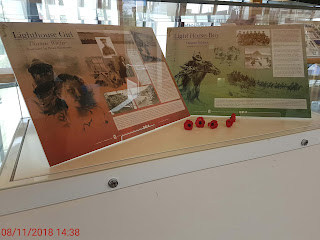 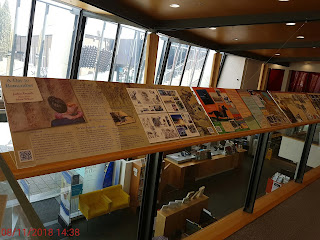 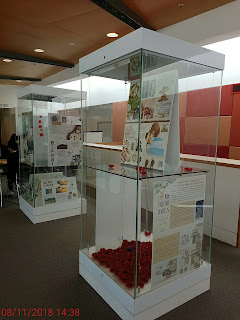 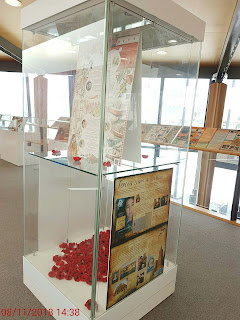 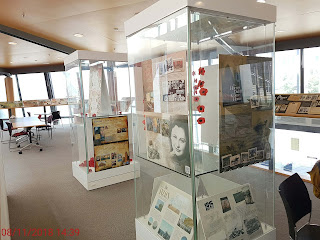 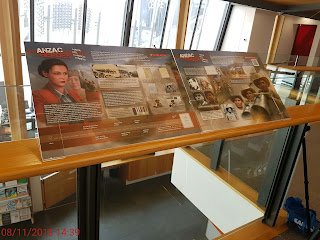 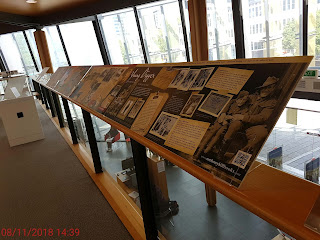 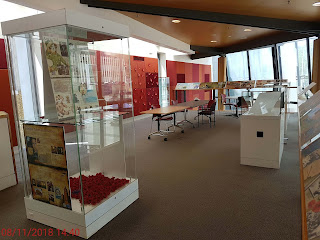 Posted by https://kidsbooksnz.blogspot.com at 20:34 No comments:

Canberra Library is going to host the Anzac Stories: Behind the Pages Exhibition in November to commemorate 100 years since WW1 ended on November 11.

Critics have said about the two books:

Hill's book is historically accurate. Teachers can feel confident that Soldier Boy is just about as close as you can get to an accurate historical representation in a novel form. Christopher Bantick, Canberra Times.

Anthony Hill has pieced together a moving portrait of Jim's tragically short life based on the recollections of his family and letters he wrote home from the war. Greg Thom, Herald Sun.

As a teenage Anzac, Jim Martin is seen as a figure to whom today's teenagers can relate ... perhaps we are now seeing John Simpson being replaced by Jim Martin, carefully chosen to appeal to a new generation and to continue the Anzac legend. John Connor, Australian Book Review.

... An exceptional addition to the children's literature of war. Kevin Steinberger, Magpies magazine.

Posted by https://kidsbooksnz.blogspot.com at 19:39 2 comments:


Exciting news from Mark Greenwood and Andrew McLean - their new book 'The Happiness Box' is due to be released August 1, 2018.

Two of Mark's children's war books are in the exhibition and featured here. Mark is an author with a passion for history. His award winning books have been published and honored internationally. Andrew McLean trained as a painter and teacher, and taught in secondary schools before becoming a lecturer in painting and drawing at Caulfield Institute of Technology. He has been a full-time artist now for more than thirty years.

I asked Mark and Andrew questions about their latest book: 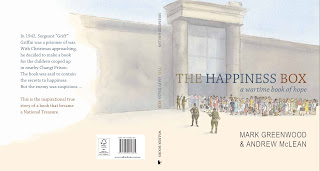 How did you discover this wonderful story?

I first saw The Happiness Box alongside Sir Don Bradman’s cricket bat and Ned Kelly’s helmet as part of the ‘National Treasures from Australia’s Great Libraries’ touring exhibition. There it was - a children’s book set in Changi Prison, of all places! It showed that books and reading, knowledge and education can transcend circumstances …and might very well be a secret to happiness.

Did you need to travel away from home to research the story more?

I traveled to Singapore for initial research and visited the Changi Prison Chapel and museum - a sombre reminder of the events that unfolded there between 1942 and 1945. I will be returning to Singapore this September to launch the book at the Asian Festival of Children’s Content – which seems appropriate as the Happiness Box holds a prominent place in both Australian and Singaporean children’s literary history.


Were you able to interview any of the Changi prisoners and what was their response?

I did interview an ex Changi POW while writing the book. I was shocked by some of the stories he confided to me. But lurking deep beneath the surface of my book was something deeply personal. The Happiness Box is dedicated to ‘Eric’ – my step grandfather. We were very close. He passed away when I was young
and knew nothing of the horrors of what happened to Eric, and all those like him, who were sent from Changi to work as slaves on the Burma-Thai Railway.
How have you decided to tell that story within a story?

I always thought the circumstances of the making of the original book were every bit as interesting as the actual book itself. My book is a tribute to the human spirit and the power of books to transcend circumstances and offer hope and happiness. In the original book the characters dig up the Happiness Box. What they find inside are books. For so for the author, Sir David “Griff” Griffin, reading was a key ingredient in the secret to happiness.


Often an author has to leave out valuable bits of information because of the word count or because it doesn’t move the story along. Was there anything that comes to mind?

Sometimes we do lose words in the process of creating the final narrative. I always thought it was interesting that the enemy also encouraged reading and where did the books come from that Griff wanted his mates to read? Here is a piece that didn’t make it to the book:
‘Books were donated from the kitbags and some were trucked in after being looted from Singapore. “Books are the answer,” a Colonel put it to the Japanese commandant, “To prevent thoughts of escape.”  Within days a convoy of trucks arrived and the contents of the Singapore Library were loaded in: History, poetry, biography and a great many subjects, both academic and practical to engage and educate the men. On steamy nights Sgt. Griffin slept on the floor between cases of books. The library was his lighthouse. Within its walls his thoughts were free. He studied the characters in books. He stored their voices in his heart and wove them into his own words.’


What did the illustrator use to inspire him to illustrate the page spreads?

From Illustrator Andrew McLean: “It was great to pay homage to the artists in Changi and I don’t think I would have been able to do it without them. Ronald Searle in particular was a great draughtsman and really brought the POW’s lot in Changi to life for me.”

Did you see the ‘Book of Happiness’ at the National Library and take any photographs? If so, can you show us? 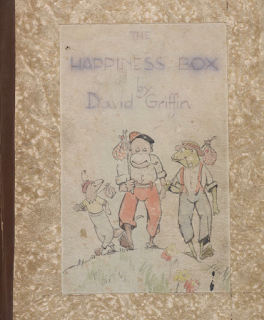 I only have a photocopy of the original book, which is kept in the collection of the State Library of NSW. I hope to be able to see the original Happiness Box, side by side with my book, when I’m touring Sydney schools for Bookweek in August. This year’s CBCA Book Week’s theme is Find Your Treasure, which is timely as The Happiness Box is the story of a book that became a National Treasure.


What do you hope children will get out of reading your book?
Although The Happiness Box is set in a dark time in history, the focus is on hope and the general themes and values explored are the importance of books and reading, and the “secrets to happiness” such as friendship, kindness, compassion and generosity. I wanted to create a beautifully illustrated, well-researched book that would be accessible and uplifting and would be a unique resource for educating children about World War II. At its core, the Happiness Box is a story about the power of reading and how books might very well be one of the secrets to our happiness - a great message for teachers and librarians to reinforce the power of books and storytelling.

What is it? Over 20 posters (includes two posters per author/illustrator) A2 size, professionally designed, showing how authors and illustrators have researched and developed their Anzac books.

You also have this blog packed with teaching resources, posters, and interviews.

Print the posters on paper, cardboard or foam boards and display in your libraries or halls or classrooms.

Here's an example of one of the posters on display at two Australian Libraries (printed on foam boards). 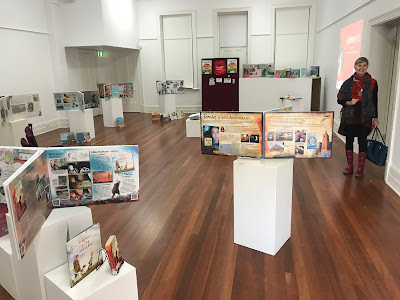 Posted by https://kidsbooksnz.blogspot.com at 16:36 No comments: 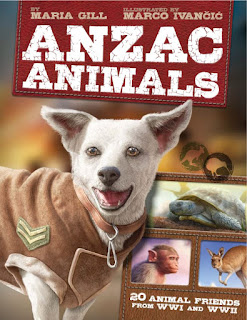 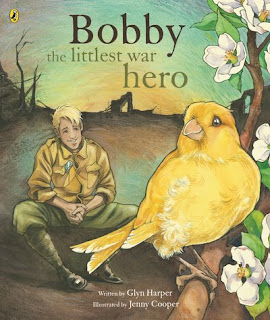 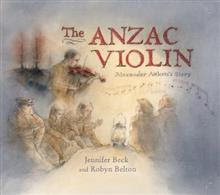 Also congratulations to Fifi Colston and Jennifer Beck for their book Torty and the Soldier being selected as a 2018 Storylines Notable Book.
Posted by https://kidsbooksnz.blogspot.com at 03:55 1 comment:

Some of the Australian authors in the exhibition have just been selected for 2018 Notable Book Awards. Congratulations to these authors in the Anzac Stories: Behind the Pages Exhibition:

This month we have award-winning author Christina Booth.

Christina Booth is an author and illustrator living in Tasmania, Australia. She has been drawing ever since her parents gave her a pencil and was encouraged from a very young age to develop her talent. Christina studied fine arts and teaching at university and has taught for many years. Her passion for reading also began at a very young age and was known to 'consume books'. After the arrival of her first child, Christina decided to follow her dream to be an author and  illustrator.

Her first picture book was published in 2007 and has been followed by many more, including stories written by other authors. Her books often feature her local native fauna and flora but Christina also loves to tell funny stories and stories that help children understand our past to create a better future. She believes that all stories should offer hope.

Christina's books have been highly awarded and also published internationally. Her Picture book, Kip, won the Children's Book Council of Australia's Honour Book Award and her story, Welcome Home won the Environment Award for Children's Literature. Many others have won CBCA Notable Book Awards, her latest being The Anzac Tree in 2018.

Christina loves sharing her passion for reading and art with children and adults and enjoys working from her bush studio with visiting native animals and birds. You can visit Christina's website at www.christinabooth.com


Check out Christina's new page for The Anzac Tree.

Posted by https://kidsbooksnz.blogspot.com at 16:40 No comments: