This week we have well-known author Pamela Rushby and her book 'The Horses Didn't Come Home'. 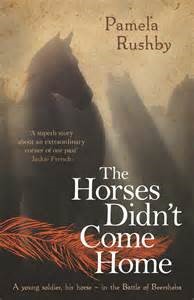 A boy, his horse – a war far from home
The last great cavalry charge in history took place at Beersheba in the Sinai Desert in 1917. It was Australian soldiers and horses that took part in, and won, this amazing, unexpected, unorthodox victory. The men proudly proclaimed it was their great-hearted horses that won the day. But, in the end, the horses didn’t come home …

OLMC Library blog says, "The Horses Didn’t Come Home by Pamela Rushby is a beautiful story of loyalty and courage that highlights the bond between the Australian Light Horse soldiers and their horses. This Australian novel tells the story of the victorious cavalry charge at Beersheba in the Sinai Desert in 1917 during World War I, which is in contrast to the horrific events at Gallipoli."

Exciting news from Pamela: "Well, I’ll be off to Israel in October to attend the special commemorations of the 100th anniversary of the Battle of Beersheba, which features in ‘The Horses Didn’t Come Home’. This will take place in Beersheba and they plan to recreate the 2-day route the Light Horse took across the desert, and then the Charge itself.   (If anyone is interested in going along, the Israel Travel Centre in Rose Bay, Sydney, is running a special tour that takes it in.)"

Here's Pamela talking about the 'The Horses Didn't Come Home':

Congratulations to Pamela Rushby for her book 'Lizzie & Margaret Rose' being selected as a CBCA Notable Book.

Read more about Pamela Rushby and her book on her Anzac Stories blog page. And in the Courier Mail.