The Anzac Stories: Behind the Pages exhibition has many fabulous Australian and New Zealand authors and illustrators in it. Go to Authors/Illustrators/Books to see the full list.
This month we have award-winning author Corine Fenton. Here's her launch speech about researching My Friend Tertius. 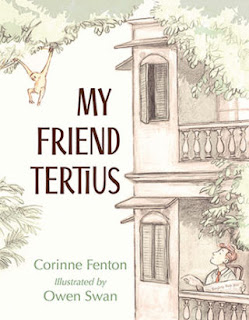 This story has been the biggest struggle. I thought Queenie took a long time at almost five years. Tertius has taken a decade. But now I can say, without any doubt, that every bit of research, every word changed, moved, altered and agonised over, has truly been worth it.

For a story, which from the beginning seemingly told itself, its format as a picture book was like writing a door-stopper and then choosing one word from each of the 3,000 pages and cobbling those one-words together. And they had to be exactly the right words.

From the moment I heard about Tertius, then discovered his connection with Arthur Cooper, I couldn’t let either of them go. I knew their story was a wonderful, exciting, marvelous adventure, but more than that, it is a love story.  A tale of caring and dedication, of making allowances and sacrifices and risking everything for something you love. To be honest, I hadn’t planned to write about a man and a gibbon at all.

To follow Queenie: One Elephant’s Story, I wanted to write a story about all the colourful animals who have resided at the Melbourne Zoo – a snippet of the ones with character. But before I got anywhere with that, I heard about Tertius, a gibbon who had once lived at the Melbourne Zoo. But Tertius was different, he sipped orange juice with a straw, enjoyed a real cup of tea morning and night and slept in the zoo director’s house in a basket. From newspaper articles and zoo records, I learned he’d had another life before the zoo, so I started working backwards.

I found articles which suggested he’d come from the port of Fremantle. I happened to be at a writer’s festival in Fremantle at just the right time, so I checked through Customs and police records for 1942, with fellow writer Karen Tayleur beside me, and we drew a blank.

Tertius was an unusual name, particularly for a gibbon, so I wondered where that came from. I Googled and one day found a short reference to a gibbon called Tertius in books written by an American author & journalist, an adventurous soul who I think was born way before her time, called Emily Hahn.

I read all of the books by Emily Hahn I could get my hands on and from them were references in other books, to a man called Arthur Cooper who traveled with a gibbon.
Eventually I found Emily Hahn’s daughter who pointed me to the Lilly Library in US which housed her mother’s collection of writings and amongst it I found a letter that Arthur Cooper had written to her in 1973 – with the most precious photos of Arthur Cooper and Tertius. That was like finding gold.

Research for this story was truly like hunting for pieces of a jigsaw. A very large jigsaw.
I also found references to Arthur Cooper and Tertius in books about World War II and I spoke to an elderly man, then a retired Vice Principal of Scotch College, who had once worked with Arthur Cooper in signals intelligence in Melbourne. 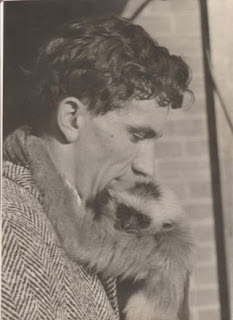 Arthur Cooper was an eccentric, brilliant, linguist who also wrote poetry and worked for the foreign office in signals intelligence and in 1973 he translated Li Po and Tu Fur Poems in Penguin Classics. His friend, Michael Alexander, who contacted me after I’d placed an advertisement in the Australian Nurses Journal in 2010, described him as ‘an exceptionally gifted linguist and thinker about language, of an old-fashioned sort; a member of the Anglo-Irish gentry, though resident in England; an eccentric, if eccentrics disobey some social conventions (though he was scrupulously courteous) and are somewhat impractical. ‘

In a time and a place when it was quite acceptable to carry an exotic animal into bars, to drive about in cars and visit famous restaurants, Arthur Cooper saved a little Gibbon and showed him a different existence.   Arthur Cooper cared for him and loved him.

Dedication: This book is dedicated to a small gibbon and a man called Arthur Cooper who risked all to save his friend ~ you see, once there was a gibbon called Tertius.

‘One question kept echoing in my mind – if I had to leave, what would I do with Tertius?
Some days he came to work with me, sitting up like a little emperor in the old Rolls Royce I’d borrowed from a friend who’d returned to London when war was knocking on our doorstep.’
Posted by https://kidsbooksnz.blogspot.com at 19:32 No comments: