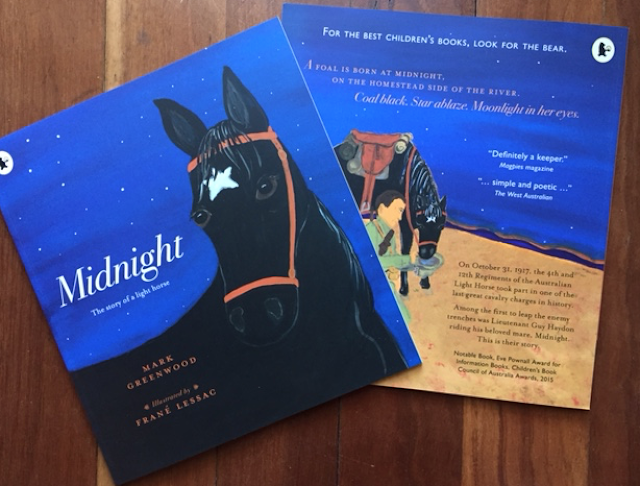 Excerpt from Frané Lessac's blog about the 100 year commemoration of Midnight's service in WWI.

October 30th, 2017 | Category: Books, News
It will be 100 years ago tomorrow, that Lieutenant Guy Haydon bravely rode his beloved mare, Midnight, over the enemy trenches in Beersheba. Horse and rider served together until sunset on 31 October, 1917. 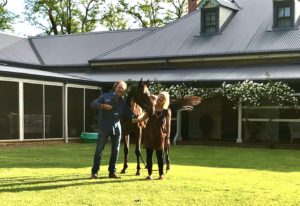 They took part is what is known as the last great cavalry charge of WW1 – ‘a defining moment in history’. This true story is immortalised in our book, Midnight – The story of a light horse.

To commemorate the anniversary of this event, we returned to Midnight’s birthplace and inspiration for our book.

It was here, under this tree on the Haydon Horse Stud in the Upper Hunter Valley that Midnight was born. 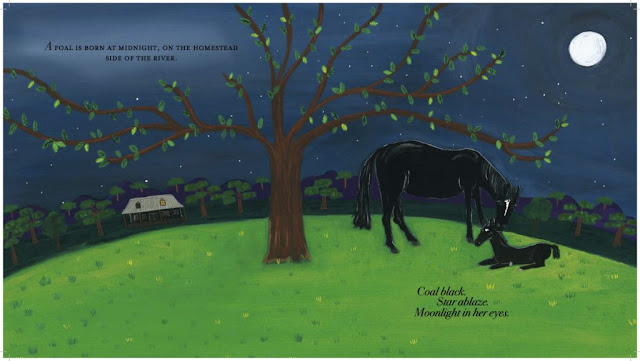 “A foal is born at midnight, homestead side of the river.  Coal black. Star ablaze.  Moonlight in her eyes.”

A fact not mentioned in the book is that Moonlight is Midnight’s mother. When you now read the last page alongside with the painting, be sure to grab a tissue.

The original art from Midnight was exhibited at the RSL Hall in Murrurundi over the weekend, alongside the local school children’s artworks inspired by our book. 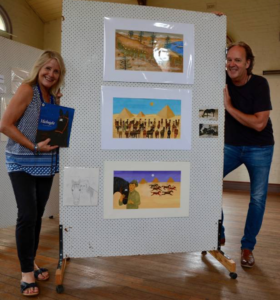 Read more here and here.
Posted by https://kidsbooksnz.blogspot.com at 01:59 No comments:

Albany Library in Western Australia recently hosted the 'Anzac Stories: Behind the Pages' Exhibition and had this to say about the exhibition:


"I wanted to thank you for all of your hard work in getting the War Books Exhibition together!

The images and stories behind them are so fascinating and we look forward to having them on display again during the final ANZAC commemorations here in Albany.

Thank you so much for this opportunity, I wanted to share a couple of photos of the display in our Town Hall.

The students were very excited to find interesting facts and recognise books and stories that had heard about! The books featuring animals were extremely popular."

Posted by https://kidsbooksnz.blogspot.com at 17:20 No comments: