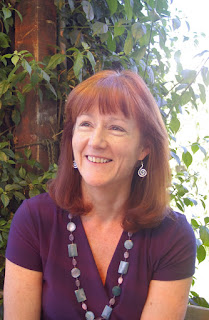 Sherryl Clark’s first children’s book, The Too-Tight Tutu, was published in 1997, and she now has more than 65 published books. Her other titles include a number of Aussie Bites, Nibbles and Chomps, and novels. Her YA novels are Bone Song, published in the UK in 2009, and Dying to Tell Me (KaneMiller US 2011, Australia 2014).
Sherryl’s verse novel Farm Kid won the 2005 NSW Premier’s Literary Award for children’s books, and her second verse novel, Sixth Grade Style Queen (Not!) was an Honour Book in the 2008 CBCA Awards. Other recent titles include a picture book of poems, Now I Am Bigger, the middle grade novel Pirate X and the Rose series (Our Australian Girl). Her verse novel, Runaways, was released March 2013. Meet Rose was shortlisted for the YABBA and KOALA children’s choice awards in 2013. Her books have been published in Australia and overseas, including the USA, UK, Spain, Mexico and China.
Sherryl teaches creative writing at Victoria University Polytechnic. Her website is at www.sherrylclark.com, and she also has a site about children’s poetry (with teacher resources) at www.poetry4kids.net 1915 and World War I has been going for over a year, but in Melbourne life for Jimmy and his mum is hard. Jimmy’s brother, Arthur, couldn’t wait to enlist and sail off to fight at Gallipoli, and there’s been no word from him for weeks. Meanwhile, Jimmy’s mum is sick and he’s forced to work in the rail yards to keep a roof over their heads and food on the table.
Jimmy is tempted by an offer of work from local crim, Bill Prosser – more money and less hard graft, but he knows Bill’s reputation. However, when Arthur arrives home from the war, severely injured and unable to get a job, Jimmy gives in and goes to work for Bill. At first it’s running errands and collecting betting money, and the extra money is a great help. At home, Arthur is suffering from nightmares and not coping, and, more and more, Jimmy feels the heavy weight of responsibility.
When Jimmy discovers a plot by Bill and his mate to stage a payroll hold-up, he must make a decision. Go along with it and hope he doesn’t get caught? Or stand up to Bill and risk retribution? And what can he do about Arthur, who is sinking further and further into depression?
Jimmy’s War shows the reality of life at home during the war, and the lasting effects on the soldiers who returned.

What was a positive outcome from writing this book?
It gave me the opportunity (and excuse!) to research my grandfather’s and great-uncle’s war records. My granddad never talked about being in the war. All we knew was he was ‘in the desert’. I discovered that he had been in the N.Z. Mounted Field Ambulance and the Mounted Corp in Egypt so would have been with horses.  My great-uncle fought in a Field Artillery unit on the Western Front, was killed in action and is buried in a Belgium Military Cemetery. It gave me real pleasure to name my characters after them.

What was something sad or tragic that you discovered?
As part of my research I read several books about the Gallipoli campaign. One included excerpts of letters and diaries by soldiers, and one was about war reporter, Charles Bean and his diaries. The horrific details of the conditions there, the bungling and errors that cost so many needless lives, the way the huge number of casualties was censored, and the poignant writings by the soldiers – all were overwhelmingly both sad and appalling. I ended up having nightmares and had to stop reading.

What was something interesting you discovered?
As more and more men enlisted and went overseas, and reports of casualties were censored, most people in Australia were unaware of what was really happening and how bad the losses were. But when the first soldiers came home on the hospital ships and people could see the reality, I think the tide turned. The government tried twice to bring in conscription with a referendum, and twice the vote went against them. When I read that, I was very happy that the truth and ‘people power’ had won through.