The Red Poppy, Torty and the Soldier 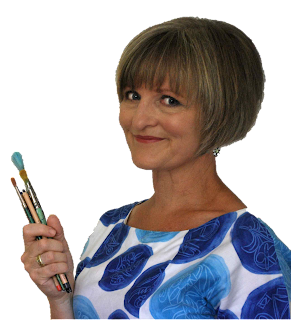 Graduating in Wellington with a Diploma of Visual Communications Design, Fifi freelances with fingers in many creative pies. She is a published junior fiction novelist, children’s book illustrator of more than 30 titles and was a long standing television presenter of arts and crafts on firstly TVNZ’s ‘What Now’ and then ‘The Good Morning Show’. Fifi is a veteran of Wearable Arts; a finalist and award winner over 20 years with 22 entries in show. She has also worked with Weta Workshop, 3 Foot 7 Productions, Pukeko Pictures and The Production Shed in the New Zealand TV and film industry as a costumier, puppet maker and illustrator. When she has a moment, Fifi visits schools and community groups, inspires budding artists and writers and runs workshops in creative process. 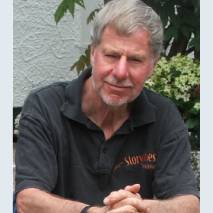 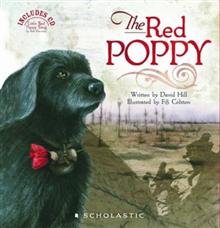 Young soldier Jim McLeod waits in the trenches of World War I for the order to attack the enemy. With him are his friends, and Nipper, the messenger dog. When they charge across no-man's-land, Jim is shot ...and finds himself face to face with an enemy soldier. 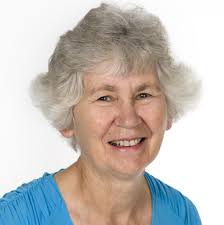 Jennifer Beck was born in Auckland and attended Waipu District High School before going on to Auckland Teachers’ College and graduating with an MA (Hons) DipClinPsych from the University of Auckland. Being a teacher, psychologist and parent has taken up much of Jennifer’s adult life, but writing has always been a cherished occupation. Encouraged by her parents, she began writing at nine years of age and in her twenties had articles published in newspapers. The 1980s saw her first books published and she hasn't stopped since. In 2003 Jennifer became a full-time writer, producing ever more children’s books, magazine articles and short stories. 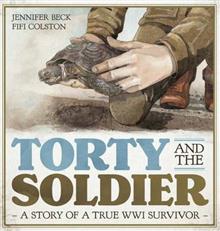 Torty and the Soldier

Meet Torty! She's one tough little tortoise with a beat-up sell and some missing toes. Torty survived a great war that raged in Europe one hundred years ago. She was rescued back then by a young kiwi soldier. Torty is truly a World War One survivor. And this is her true story.

Fifi, name something positive, something sad and something interesting you discovered while illustrating the book 'The Red Poppy'.

My husband’s grandfather Rothwell, wrote postcards to his fiancé Hilda, from 1914-1918. Particularly poignant were two from France; they said simply “Am O.K” and “Keep smiling!” I was in the process of scanning and blogging these cards for the family when I read David’s story.  Jim’s letter home never mentioning the horrors of the trenches struck an immediate chord with me; those cheerful words from a young man, disguising the reality of his situation.

Rothwell did come home from France to be a husband and father, but was far from ‘o.k’; dying just a few short years later from the cruel ravages of his war experience. Illustrating this book was a journey through his time for me.

I visited the Army Museum in Waiouru (a must see- really great!) studied WW1 uniforms up close (collected by passionate people), grew red poppies, (harder than you'd think) photographed mud (outside our house) and rubbed chalk pastel until my fingers were raw. I learned much about pastel illustration technique, but more about the horror and sadness of war.